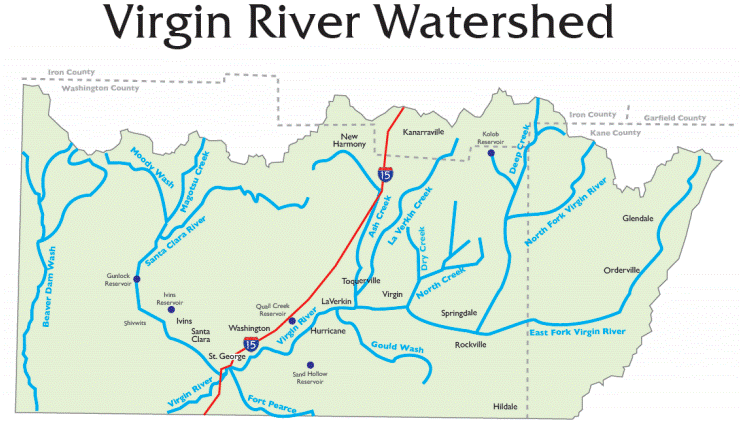 The Virgin River is the lifeblood of southwestern Utah, shaping the dramatic scenery of the area, and making it possible for people and wildlife to survive. The Virgin River is a desert stream characterized by huge flow fluctuations ranging from a warm trickle in the heat of summer to a cold, raging torrent during spring run-off and flash floods.

The Virgin River travels for over 150 miles from its headwaters above Zion National Park, twisting and turning through alpine forests and spectacular red rock canyons, into the Joshua tree flats of the Mohave Desert. Even though the Virgin is a relatively short river—with over half of its length in Washington County—it is unique in that it flows uninterrupted through such a variety of landscapes on its way to Lake Mead. 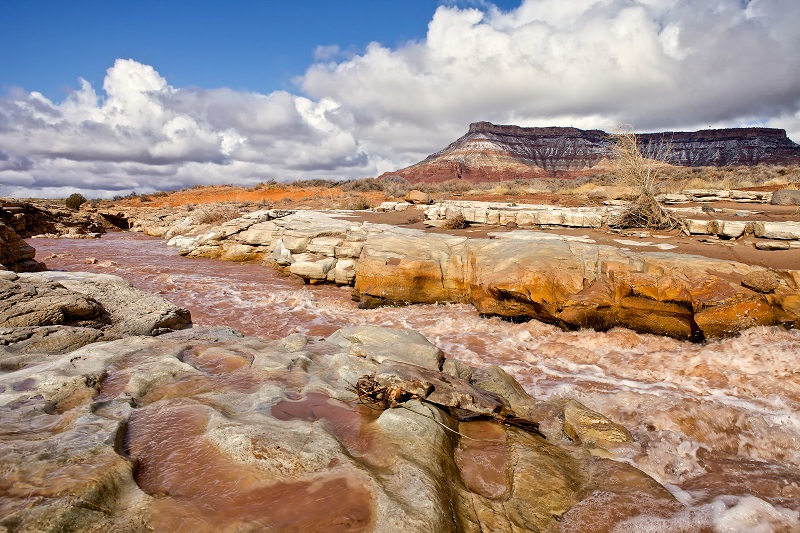 The North and East Forks of the Virgin River cut the spectacular canyons of Zion National Park, creating the beauty that draws visitors from all over the world. Many additional tributaries augment the Virgin River on its way downstream, including North, LaVerkin, and Ash Creeks, Ft. Pearce Wash, the Santa Clara River, and Beaver Dam Wash. 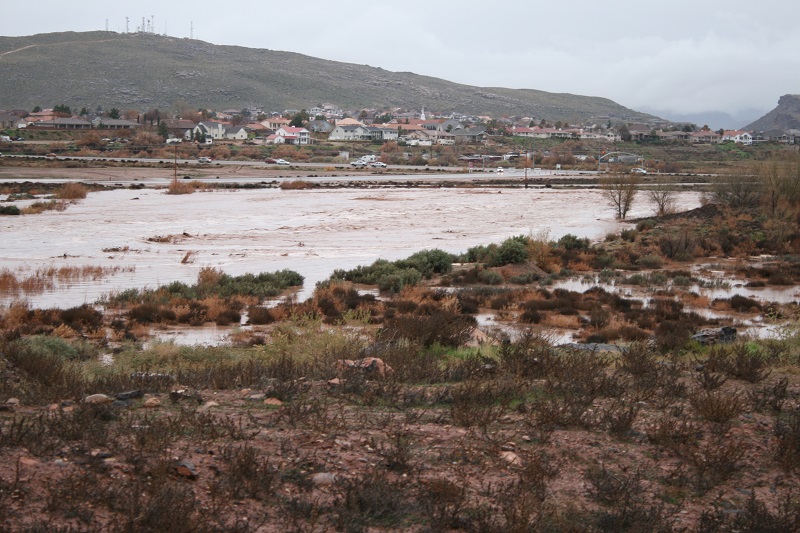 Washington County is home to more than half of the Virgin's length. For over 2,000 years, the Virgin River has been the area's lifeblood.

Washington County is one of the nation's fastest growing areas. During the last two decades, Washington County has grown at an annual rate of more than 6.2 percent. Within the next 30 to 45 years, it is estimated that as many as 648,000 people will call the area home. The current population is 175,000.

Despite flowing through an arid region, the Virgin River is home to a surprisingly diverse array of plants and animals. Southwestern Utah is located at the intersection of three physiographic regions: the Colorado Plateau, the Great Basin, and the Mojave Desert. The exceptional landscapes and habitats of this region harbor unique plant and animal communities and species found nowhere else in the world. Without the water of the Virgin River system, these species could not exist.

The Virgin River directly supports hundreds of wildlife species including, woundfin, Virgin River chub, Virgin spinedace, flannelmouth sucker, desert sucker, speckled dace, and Southwestern Willow Flycatcher. Many of these species are endangered or are considered sensitive species within the State of Utah. The Virgin River Program was established to balance increasing human demand and maintain this unique system.

One of the most rare species on earth, the endangered woundfin is found only in a small section of the Virgin River. Woundfin have large fins and scale-less, streamlined bodies that help them survive in swift, silty conditions. Although small, it is shark-like in both appearance and action as it feeds on small insects in shallow areas along the river. Woundfin live only one to two years and their survival depends upon sufficient flow within the river, especially during hot summer months. 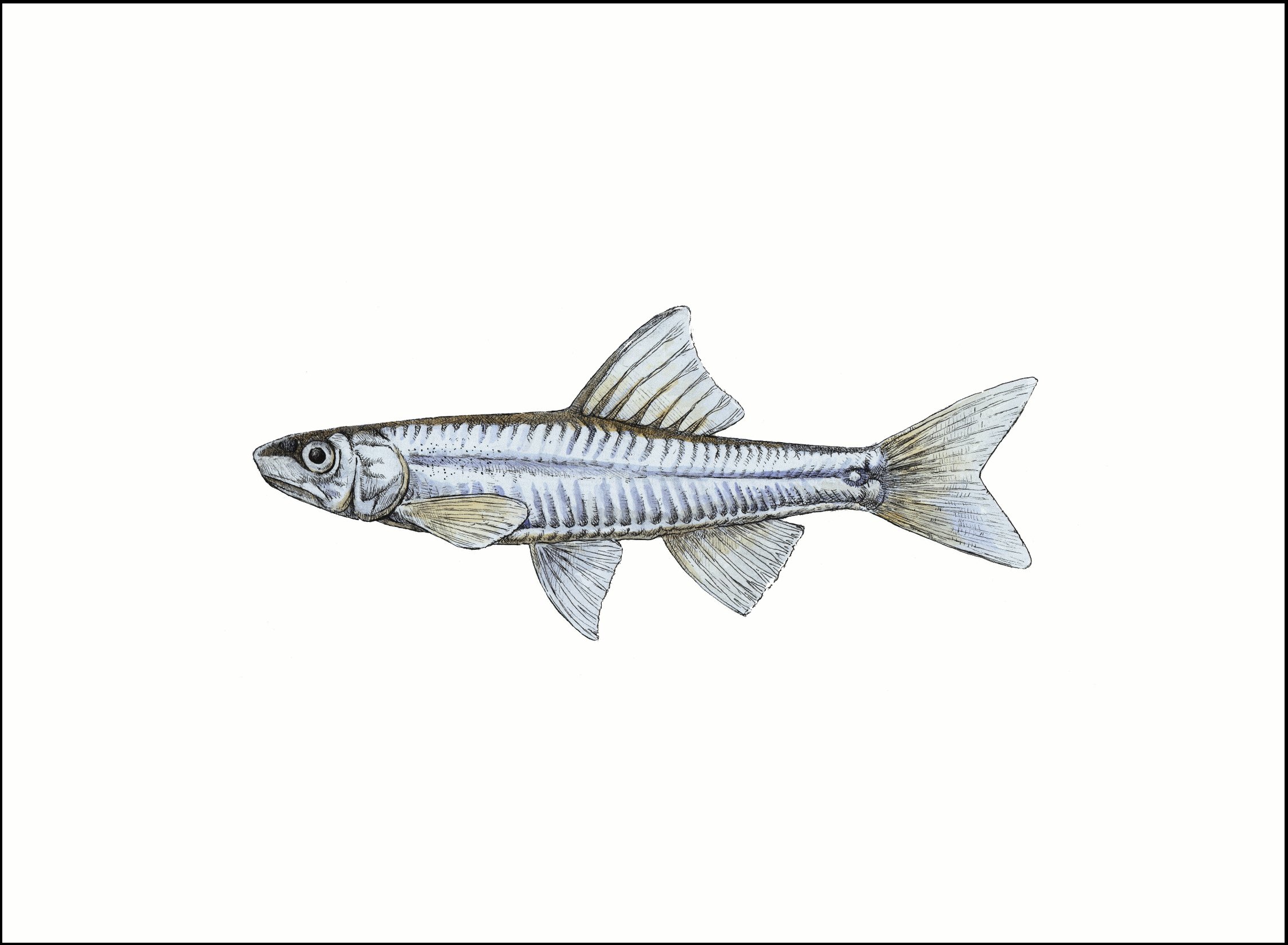 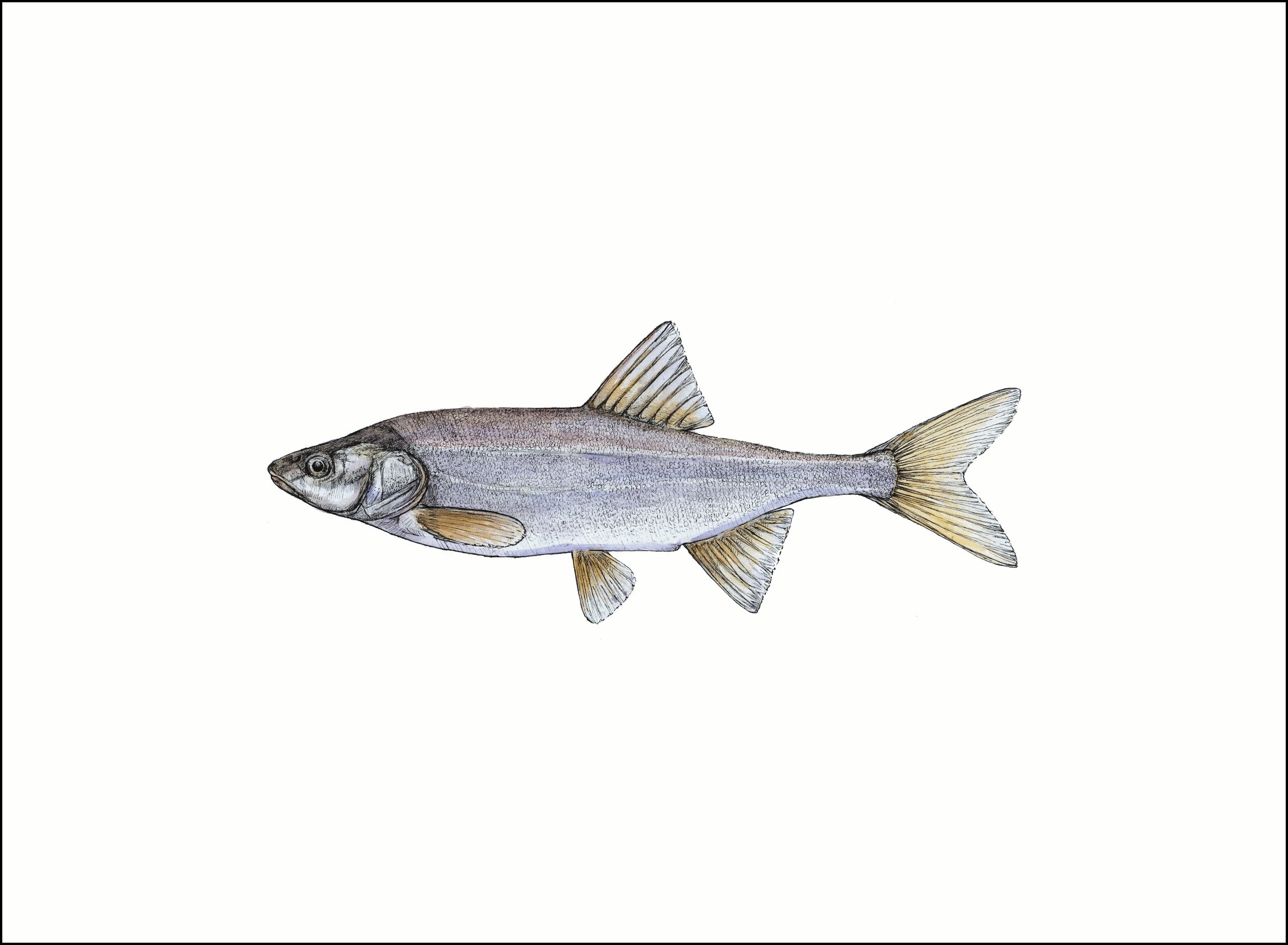 Rare and beautiful, this fish is the top native predator in the Virgin River. Chub are a fast streamlined fish with a sloped forehead, humped back, and thin rounded tail. The Virgin River chub feeds on small fish, insects, and plant matter. Chub prefer deep pools and runs with boulders and debris for cover. Virgin River chub were once an important food source for Native Americans and early pioneers. Listed as an endangered species, the Virgin River chub is found from Pah Tempe Hot Springs down to Halfway Wash, Nevada.

The Virgin spinedace looks, feeds, and behaves like a miniature trout. This silvery minnow gets its name from the sharp spiny rays in its dorsal fin. Virgin spinedace are found only in the Virgin River Basin. Unlike the woundfin and chub, which live only in the Virgin River, spinedace are also found throughout many tributary streams. Virgin Spinedace prefer deep pools and runs and are at home in both clear and turbid water.

The flannelmouth sucker is the largest native fish in the Virgin River, growing over two feet in length and weighing over six pounds. The flannelmouth's thick fleshy lips contain taste buds that help it find food along the bottom of the River, including aquatic invertebrates, organic debris and algae. Flannelmouth suckers are usually found in deep sandy areas of the Virgin River, but large numbers congregate in shallow gravel areas for spawning in the spring.

The desert sucker gets its name from the way it feeds on aquatic vegetation and insects. It uses its thick cartilaginous lips to scrape and suck food from rocks and boulders along the bottom of the river. Desert Suckers are very colorful during the spring spawning season, developing bright orange and black 'racing stripes' along their sides. Desert suckers are considered a sensitive species in Utah, where they are only found in the Virgin River and its tributaries. 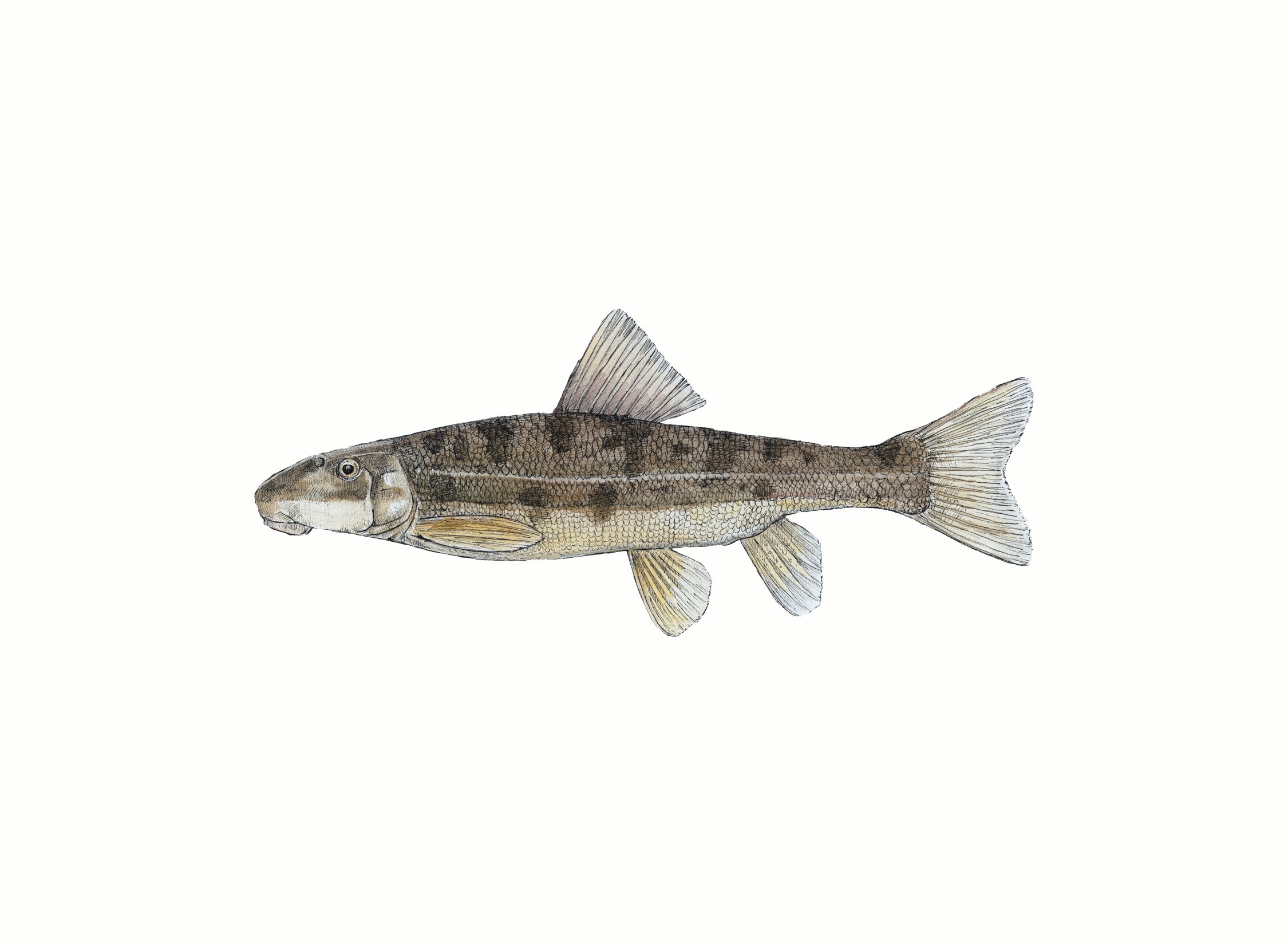 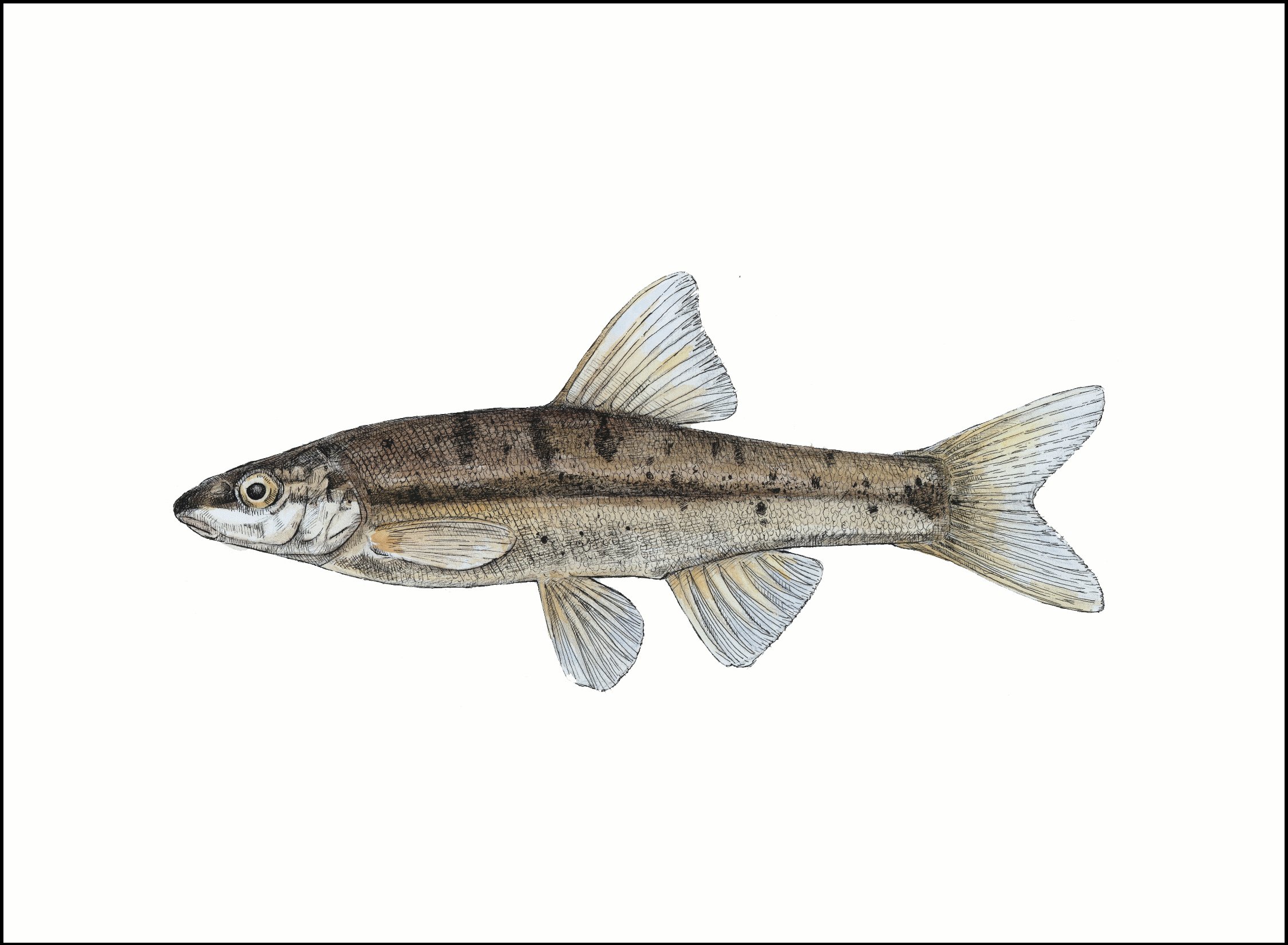 One of the most widespread species in western North America, the speckled dace is found in large numbers throughout the Virgin River and its tributaries. Speckled dace prefer rocky areas but are comfortable living in all habitats and stream sizes. Speckled dace exhibit a kaleidoscope of shapes and colors across their range. Males display bright red "lipstick" and red fins to attract mates during breeding season.

The Southwestern Willow Flycatcher occurs in dense riparian habitats along streams rivers, and other wetlands. At low elevations, the flycatcher breeds in dense, patchy habitats composed of mid-sized to tall trees and shrubs. At higher elevations, it occurs in dense stands of low to moderate height riparian shrubs. Vegetation density within 4m (13 ft) is especially important.

Preferred habitats are almost always associated with standing or slow-flowing water. The destruction of riparian habitats has caused a severe decline in the populations of the southwestern willow flycatcher. Currently, this sub-species exists only in fragmented and scattered locations throughout its range.

Historically, the breeding range reached from southern California, southern Nevada, southern Utah, Arizona, New Mexico, western Texas, southwestern Colorado, and northwestern Mexico. The flycatcher is a migratory bird that winters in Mexico, Central America, and northern South America. Currently, the breeding range for the flycatcher is similar to the historic range, though much of the riparian habitat in the southwest has been degraded by agricultural practices, invasion of non-native vegetation and urban development.

The Southwestern Willow Flycatcher is an insectivore, taking insects from the air, or picking them from the foliage.

The Southwestern Willow Flycatcher is present on breeding grounds by mid-May. By late May, nests are built, usually in a branched tree fork near the water. Typically, three eggs are laid and then incubated for 12-13 days.

The spectacular scenery and abundant resources of the Virgin River have long made the surrounding area extremely appealing to humans. The Virgin River Basin has attracted a steady stream of people from the first hunter gatherers and farmers, to the early pioneers, up to the current communities thriving along its course. Humans were drawn to the region for its water, climate, and farmable land. Currently, the water from the Virgin River has allowed Washington County to support one of the fastest growing and most dynamic communities in the nation. The Virgin River and it’s tributaries make it possible for people to live in Washington County by meeting a variety of needs.

Agriculture: water from the Virgin River and its tributaries continues to support farming and ranching endeavors throughout the basin.

Recreation: water from the Virgin River and its tributaries is stored in local reservoirs (including Quail Creek, Sand Hollow, and Gunlock State Parks) to meet the water needs of the communities. These reservoirs provide boating, swimming, and fishing opportunities for residents and visitors to the area. The river and its riparian area can offer bird watching, rafting, tubing and kayaking.

Tourism: the Virgin River is also responsible for carving Zion Canyon and creating much of the beauty that makes Zion National Park one the most visited places in the country. Zion attracts over 6 million visitors to the region each year. 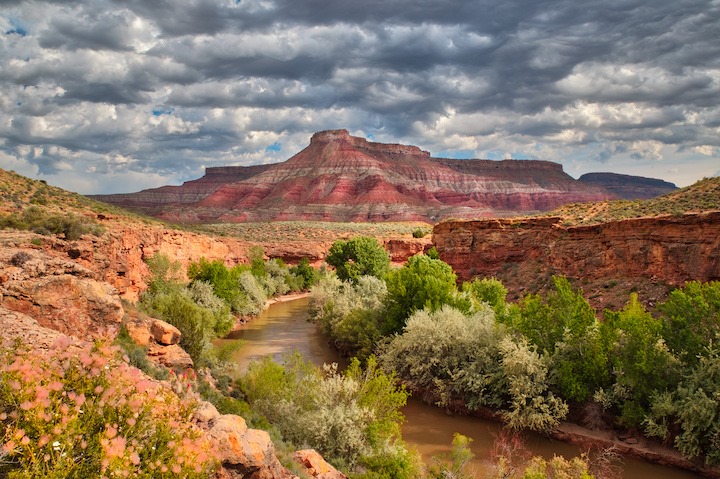 Boaters – Please be aware of the following obstructions in the Virgin River. This list may not address all of the potential obstructions.

The Virgin River Program has constructed fish barriers at three locations on the Virgin River. These locations are near the I-15 Bridges in Bloomington, near the Arizona state line, and near the mouth of the gorge in Arizona. The locations are shown on the following map. Each of the fish barriers consist of a four to five foot concrete wall and downstream concrete splash pad. They create a waterfall designed to prevent upstream migration of invasive fish found downstream in Lake Mead and in the lower portion of the Virgin River. The barriers also allow for segmentation of the river aiding in eradication of unwanted fishes found upstream of the diversions. There are also large water diversions in the river which may affect recreation on the river. These diversions are found near the town of Virgin, upstream from the Washington fields, and in Washington City.

Quail Creek Diversion – Downstream from Virgin, Utah. Unrunnable. River exit suggested in Virgin due to cliff and fencing around diversion. 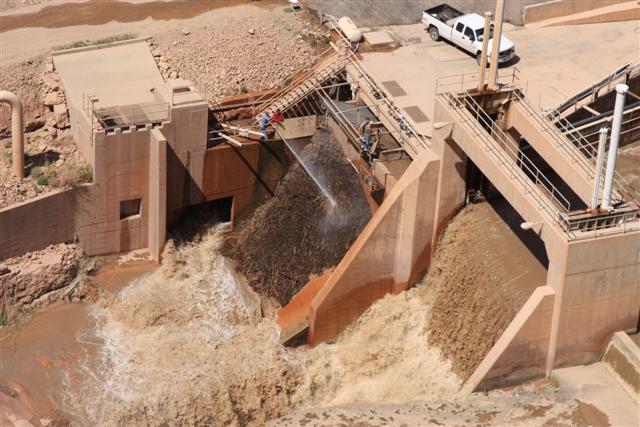 Quail Creek Diversion – Downstream from Virgin, Utah. Unrunnable. River exit suggested in Virgin due to cliff and fencing around diversion 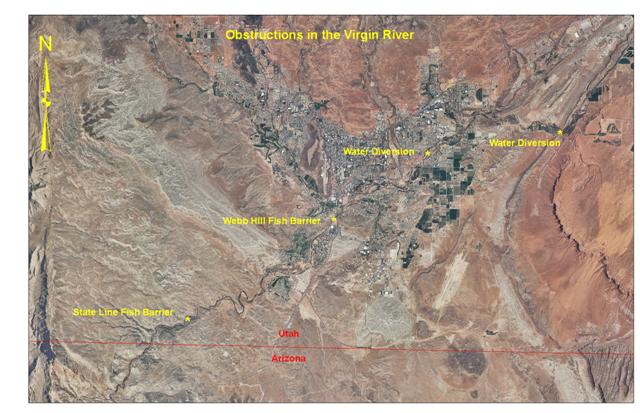 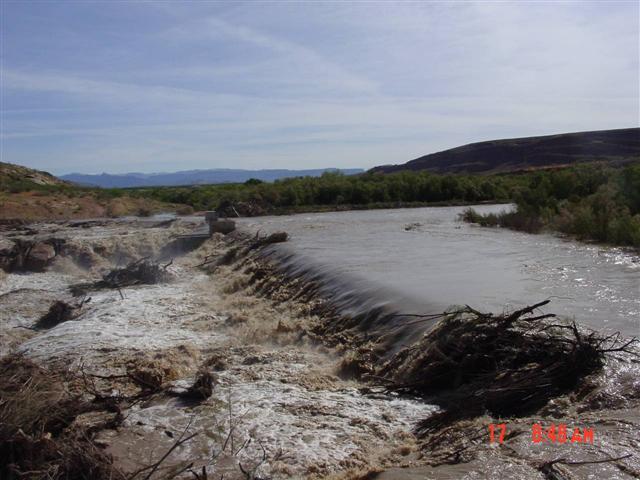 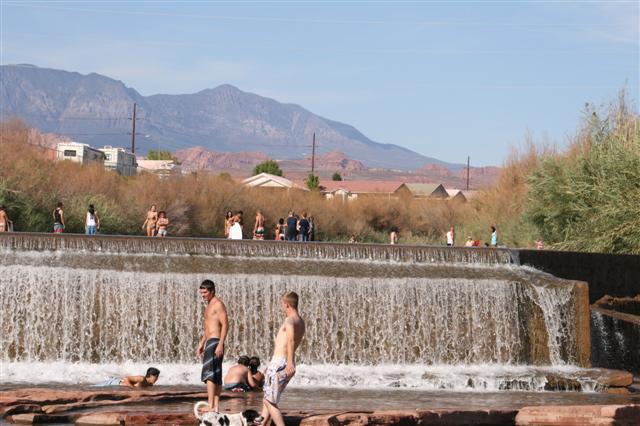 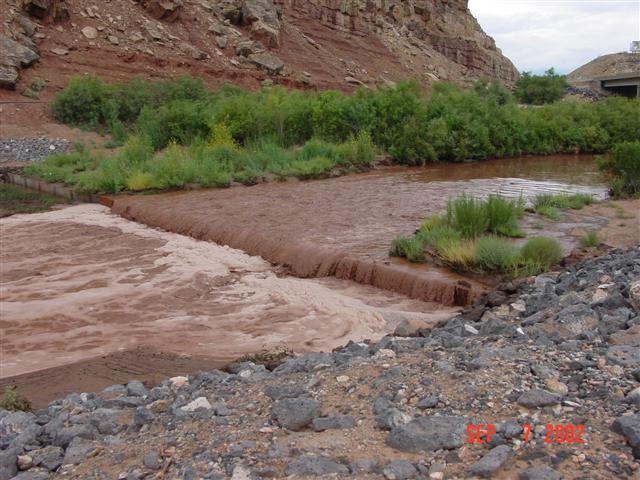 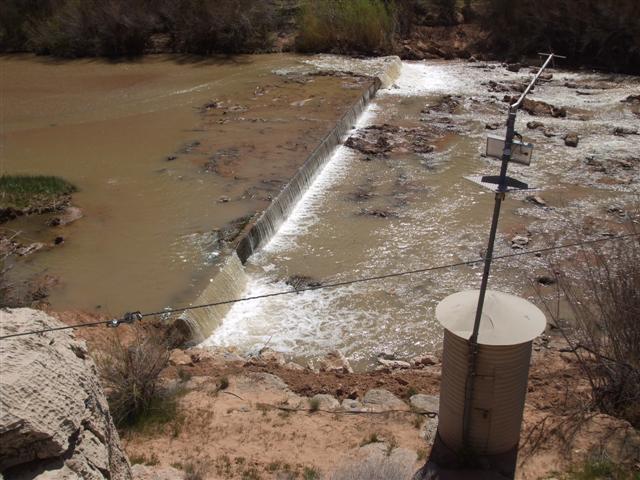 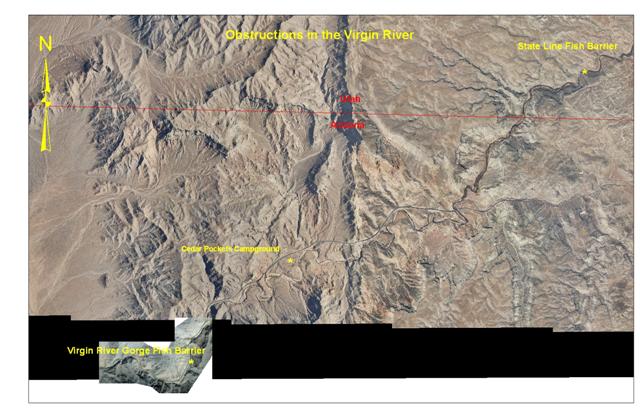 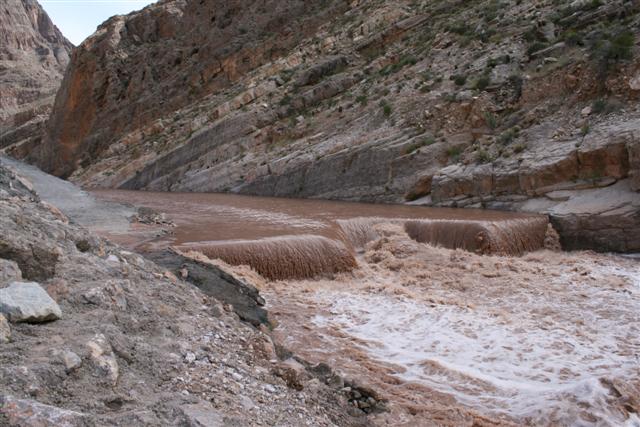 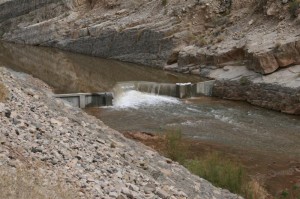